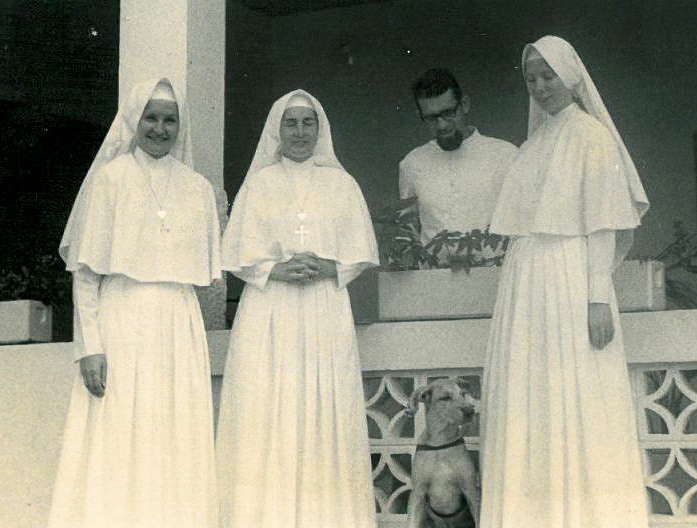 On January 22, a Saturday, 1966, Sisters Michele Best, Frances Lane and Renée Rushton flew into Guacamayas, Caquetá, Colombia, to begin the first mission on the RSHM there.

Guacamayas is a very small village in the Amazon Region in the Andes Mountains, 900 feet above sea level and one and a half degrees from the equator. It is on the Rio Caguán, and unnavigable river as it passes underground through the mountains and through deep canyons until it reaches the jungle plains.  In 1966 there were no roads into and out of Guacamayas.  Travel was by horseback or mule-teams from Neiva, a two-days journey to the North or a twelve-hour horseback ride to San Vicente to the South.  Both trips were dangerous and difficult because of the terrain and/or the guerrilla fighters who hid in the region and attacked passers-by at unexpected times.

Life in the Amazon Jungle was difficult and called for many sacrifices on their part, there were many and often humorous occurrences that made them laugh.  One day Father Carlos Massano, Pastor of the mission,  took the three Sisters on horseback to see the hanging bridge over the Caguán River that connected El Pato to Guacamayas, It was about a half-hour ride.  When Father Carlos and Sister Renée arrived at the bridge,  they expected that Sisters Frances and Michele would arrive right behind them. After waiting for about ten minutes, Father said he had better go and see what had happened to them. Sister Renée was nervous waiting for them because the jungle was very thick there, and there were anthills higher that she was tall. The three finally arrived.  Father had found the two Sisters standing with their horses nose to nose because the path was so narrow and neither could get around the other.  They couldn’t make the horses back up, so they were just standing there. How one of them turned around in the first place is still a mystery.  It took Father Carlos a while to back one of the horses up until he found space enough to turn it around.

This is one of many anecdotes Sister Renée shared with me about her experience during her ministry work in Colombia.

Sr. Renée Rushton has been a member of the Religious of the Sacred Heart of Mary for over 60 years. Currently, Sister Renée is the Coordinator at Casa Guadalupe Community in Montebello, California, where she resides.

As told to: Cecilia Brizuela Director of Communications EAP/WAP