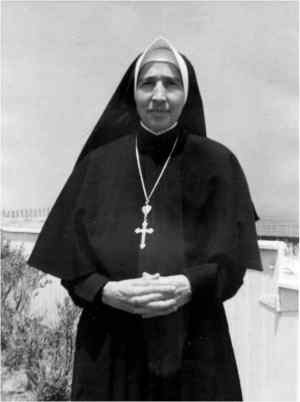 “For the early Christians. . . faith was an abundance of life in Christ, to be lived and transmitted to others. What the contemporary Christian is searching for is fully dimensioned living. A rising generation is in search of the Divine as the very core of its life.” (Mother Rita Rowley, 1963)

Elizabeth Rowley was born August 7, 1913, in County Leitrim, Ireland. She entered the Religious of the Sacred Heart of Mary in Tarrytown, New York, in 1931. She received her advanced education after entering the order: a bachelor’s degree from Tarrytown, NY, a master’s from McGill University in Montreal and a doctorate from Laval University in Quebec.

Mother Rita laid the foundation for the Institute’s response to Vatican II by emphasizing academic, ecclesial, and spiritual renewal. She wrote three circular letters to the Institute. Their titles indicate the focus of her leadership: The Role of Religious in the Church of Today (1961); What Spirit Animates You: The Letter Kills, the Spirit Gives Life (1962); Renewal (1963). During her term of office, the Generalate was transferred to Rome and the religious habit was modified.