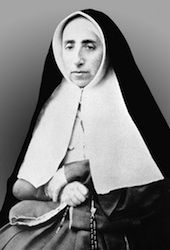 “The death of our beloved [Father Gailhac] was truly the death of the just one, he fell asleep peacefully in the Lord.”

Marie Elisabeth Maymard was born October 12, 1831, in Millau, in southern France. She was one ofthe first group of sisters to make vows as Religious of the Sacred Heart of Mary. She served for many years as the treasurer of the new Institute.

In 1879, she traveled to Rome with Father Gailhac to present the Institute’s request for canonical approval to the Holy See. Official approval of the Constitutions of the Religious of the Sacred Heart of Mary was granted on February 24, 1899, the fiftieth anniversary of its founding. Mother St. Felix had cared for Mother St. Jean during her final illness and she accompanied Father Gailhac in his old age and last illness and death in 1890.

Mother St. Felix led the Institute for twenty-seven years, resigning her leadership on April 16, 1905. As the first to serve as General Superior without the presence of Father Gailhac, she was a strong link between the origins of the Institute and continuity after the founder’s death. She died on March 6, 1922.