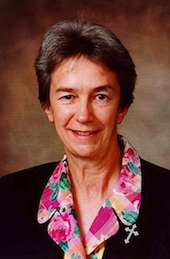 “Our call is to journey in a spirit of jubilee, which means not only receiving but giving, giving thanks, giving back, giving of ourselves, giving to others, giving life. If we journey together in this spirit of jubilee it will in itself be a celebration of that life which we have received from God and which we are called to share so that all may have life.”  (Sister Catherine Dolan, 1997)

Margaret Dolan was born December 24, 1940, in Liverpool, England. She made her novitiate at the Mother House in Béziers, France. Sister Catherine taught at the secondary level, was General Secretary under Sister Mary Milligan and Sister Patricia Connor, and was Provincial Superior of the English-Irish Province.

Elected at the 1995 General Chapter, Sister Catherine began her term of office on November 21, 1995. In response to the decisions of the General Chapter, which had the theme “Called to be Community,” Sister Catherine led the Institute in a two-year reflection on the meaning of being community. She called together a task force to evaluate and suggest better ways to use structures to further mission.

Two new administrative units came into being during Sister Catherine’s time as General Superior. In January 1997, Zambezi (previously part of the English-Irish Province) and Zimbabwe (previously part of the Eastern American Province) became the Zambezi Region. In November 1999, the English-Irish Province and the French Vice-Province were joined to become the Northern European