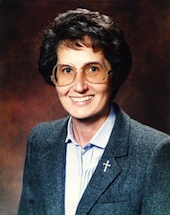 “The, world and indeed all creation, is desperately in need of compassionate response to life-threatening situations. Today, as we near the end of the Second Millennium since Christ’s birth, we are being called anew to be a voice of compassion, to be a compassionate presence in the world, and to give concrete expression to our commitment to be women of prayer and compassion.” (Sister Patricia Connor, 1991)

Patricia Connor was born in Wilkes-Barre, Pennsylvania, USA, on May 8, 1941. She entered the Religious of the Sacred Heart of Mary novitiate in Santa Barbara, California. She taught in elementary and high school and served in several positions in the administration of the Western American Province.

Sister Patricia was elected eleventh General Superior on July 29, 1985. Under her leadership, the Religious of the Sacred Heart of Mary began a planning process that led to the development of the Institute Mission Statement, ratified by the General Chapter of 1990. In addition, a novitiate was opened in Chinhoyi, Zimbabwe, for young women from Zambia and Zimbabwe. This was a major step toward the formation of a new Zambezi Region for these two countries.