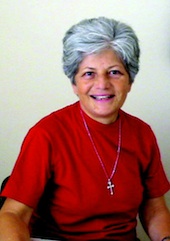 “We are called, by our form of life and work in the world, to be different and to make a difference. If we do not do that, Consecrated Religious Life has no reason to be.” (Sister Terezinha Cecchin, 2009)

Sister Terezinha Cecchin was born in Caxias do Sul, Rio Grande do Sul, Brazil, on March 18, 1943. The granddaughter of Italian immigrants to Brazil, she entered the Religious of the Sacred Heart of Mary novitiate in Rio de Janeiro, where she made her first vows on September 9, 1961.

Sister Terezinha was elected thirteenth General Superior on July 16, 2007. At that time she explained that the theme of the General Chapter, “Fan into Flame the Gift of God,” touched her very deeply as “in the Institute, we are in a moment of fanning into flame in a meaningful way the gift of vocation, the gift of the charism given to Jean Gailhac whose vision was to be in the heart of the world, wherever life and dignity are threatened.”